"I see beauty in all women" 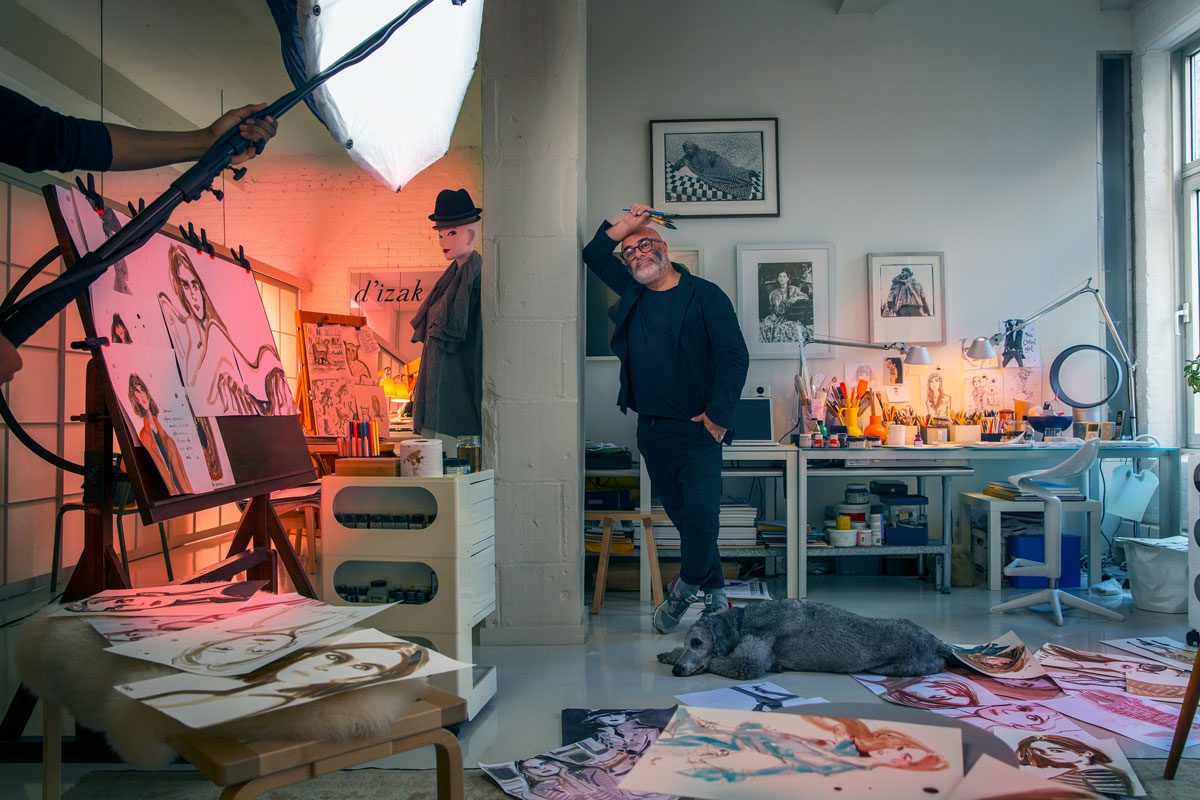 Since being discovered by Chanel, Izak Zenou has created iconic fashion illustrations for some of the world’s biggest fashion brands and retailers. Now, he’s working with Petites Mains to help bring our vision of creative fashion to life. 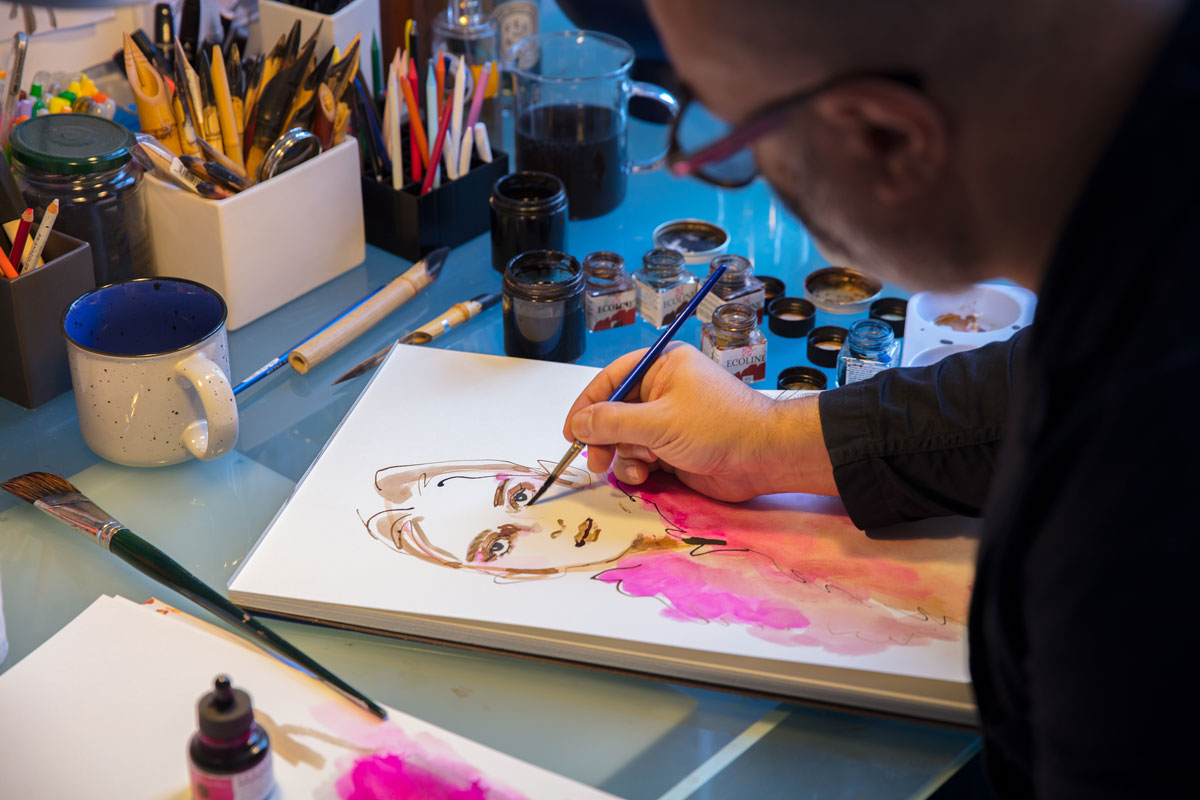 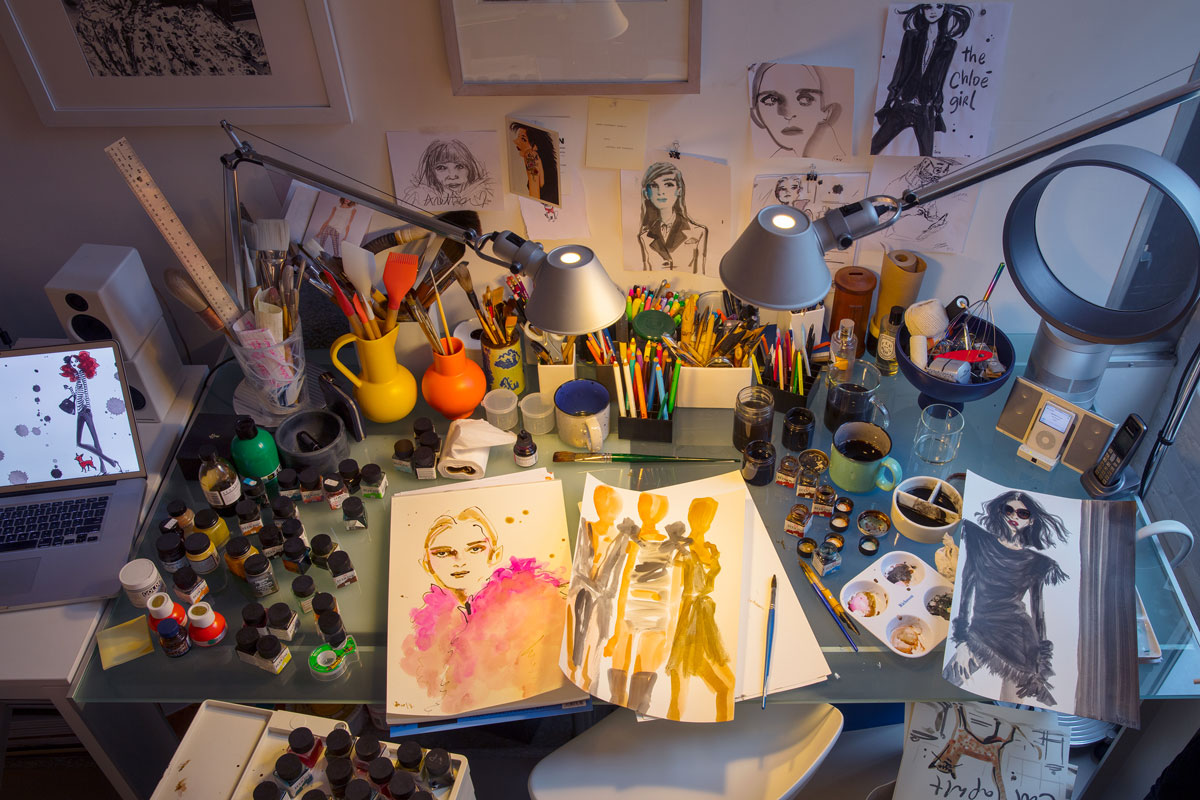 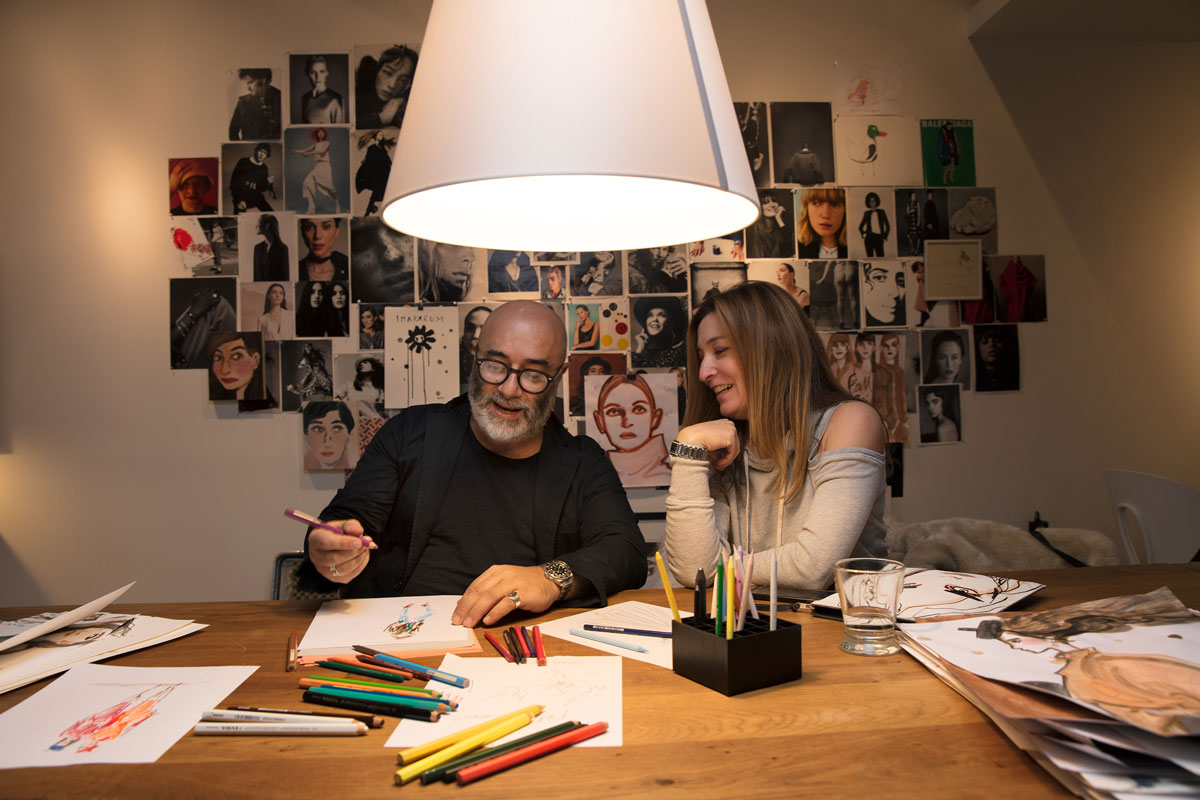 For years, the small department store Henri Bendel on 5th Avenue in New York has been a mandatory stop for me when visiting the city.  What’s drawn me there the most is the New York vibe brought to life through the vibrant fashion illustrations – I wanted to be just like the beautiful, well-dressed and outgoing epicureans displayed on the walls and on the products at Henri Bendel.As a fashion editor, the art of fashion illustration has always been dear to me, because long before the evolution of fashion photography, fashion savvy women relied on illustrations for wardrobe inspiration. 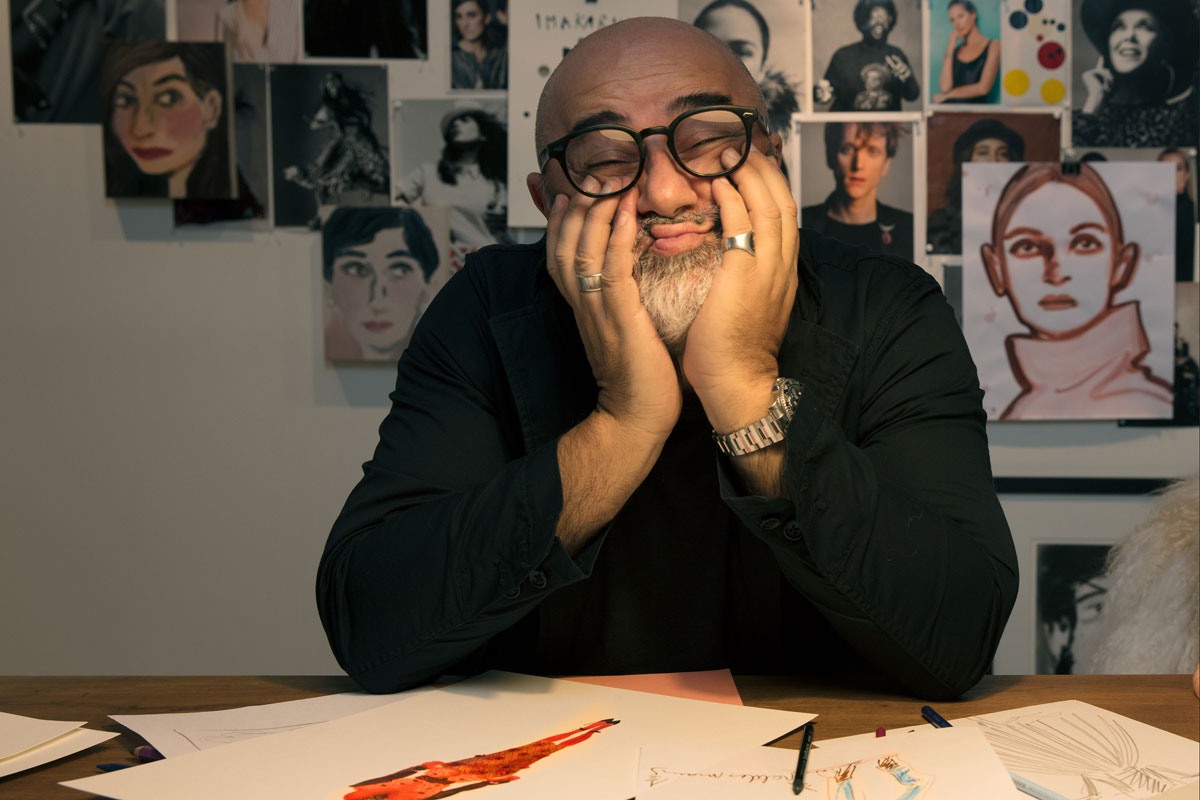 The best artists have always been able to draw the silhouettes that became characteristic of their era, with a design language that defines the contemporary style, and sense with precision. The man behind Henri Bendel’s illustrations, and a lot of other famous fashion and beauty brands' hand drawn imagery, is one of the greatest fashion illustrators of all time – the Frenchman Izak Zenou. The stars must have been aligned on the day I gathered the courage to contact Izak’s agent for a possible collaboration with the start-up Petites Mains Creative Fashion, because he accepted the assignment and has since interpreted Petites Mains feminine playfulness in a way we could have only dreamed of.

"I wanted to be just like the beautiful, well-dressed and outgoing epicureans displayed on the walls and on the products at Henri Bendel".

Izak Zenou works with giants like Lancôme, Celine, Guerlain, Longchamps, Chanel and Sonia Rykiel – to name a few. But it didn’t take many minutes before the small seed of Petites Mains´ unique concept that I caught his interest. Our first meeting was over breakfast in Tel Aviv, where we just happened to be at the same time. I was worried that he would consider our company too un-established before initally meeting him, however, my concerns were quickly dispelled – Izak is the epitome of kindness. 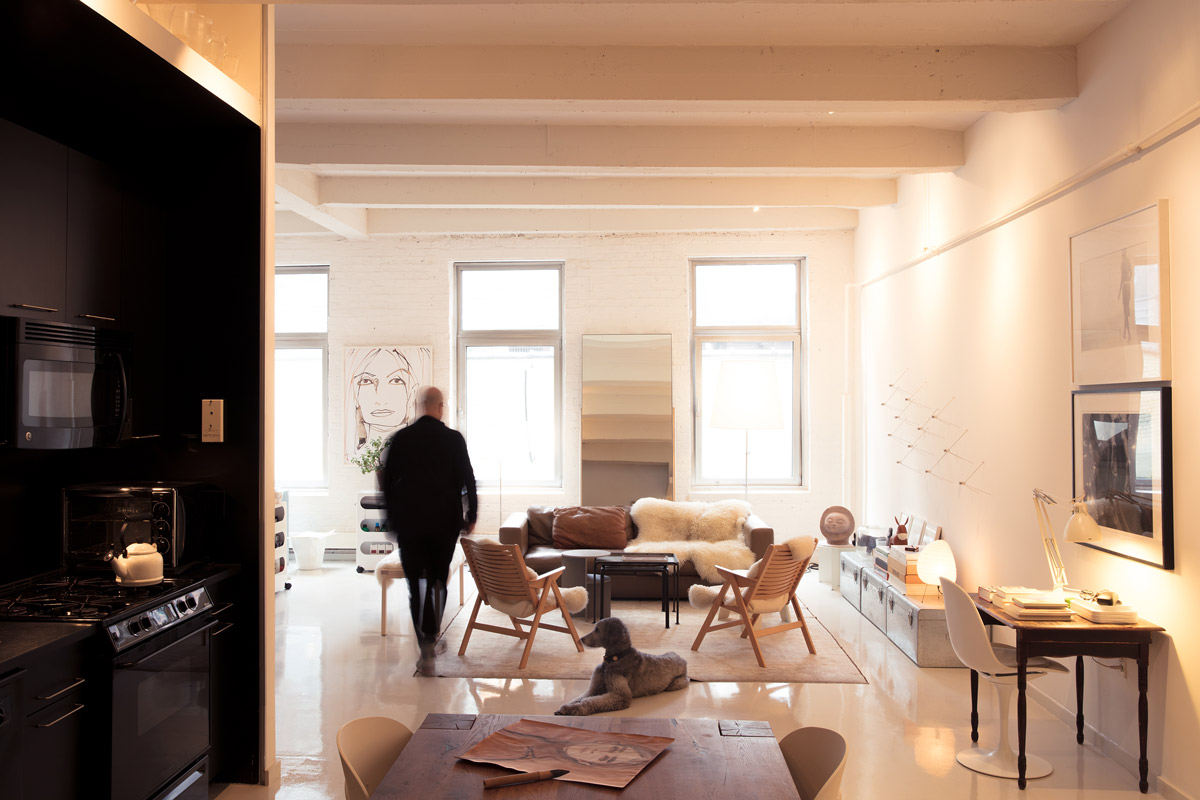 Furthermore, his ability to quickly convey a feeling with a couple of strokes is phenomenal. With just a few lines on a napkin at the breakfast table, Izak Zenou sketched my Petites Mains woman, as I’ve only imagined her to be

Izak calls himself an observer. Every day he takes Wally for long walks around the busy streets New York. He constantly observes people, faces and styles that he memorizes and transforms in to beautiful illustrations. As the photographer Jonas Fredwall Karlsson listens to Izak’s descriptions of the paintings he immediately wants to get up on the roof. The roof currently being under construction and pretty dangerous to walk on, doesn’t stop anyone – even Wally poses like a professional. A specialty that makes women wait in line for hours, and pay a hefty sum for, is Izak’s live portraits. Over the last ten years Izak has performed his popular live shows where he interprets women with fast sketches and flowing watercolor techniques.

"Actually, each portrait often doesn't represent the woman I'm drawing, but is rather a depiction of several beautiful women. They tend to recognize themselves in all different portraits, which is quite funny. My secret is probably that it is possible to interpret several different personalities in my sketches".

I understand what he means. During our photo shoot he sketches and draws a number of different women that I recognize myself in. I even ask him; “Is this me?” and point to one of his drawings, to which he replies: "Of course, it’s you if that is how you see yourself". 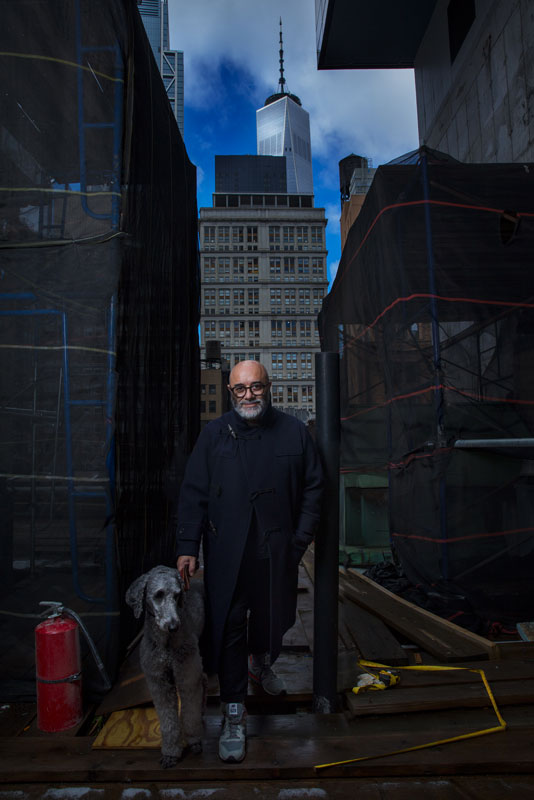 A couple of days earlier I observed Izak as he was performing, in the middle of the Christmas rush, at Henri Bendels. His last one. The 20 years of collaborating with the store has come to an end, since it’s closing. But that’s another story – a story that Izak has decided to tell through an illustrated book. There are many books that Izak has brought to life with his characteristic brush strokes, the latest one is a children’s book about same sex marriages, and a book about cats on a catwalk is on its way. He really excels in his last live portrait show for Henri Bendel. After seeing him work in front of an audience, I understand why rosy-cheeked women stand in line to be painted by the master, because in Izak’s eyes everyone is beautiful and exuberant. In front of his sketchpad they are flattered by the attention creating an intimate moment.

"I always talk to them about their background first. In fact, I can ask about anything and they respond. Painting someone's portrait is like going to a therapist in a way. It is very interesting, because everyone seems eager to talk about personal matter. It's something I really like, almost feeling as if I was the conductor of an orchestra".

"Painting someone's portrait is like going to a therapist in a way. It is very interesting, because everyone seems eager to talk about personal matters. It's something I really like, almost feeling as if I was the conductor of an orchestra".

Have you ever failed to connect, and accidently offended the person you’re drawing?

"I think children are difficult. Like when the French luxury child brand Bon Point opened in New York and I was one of the main attractions at the opening. Parents are so sensitive when it comes to their children and have a picture of how the child should look. When the portrait doesn't turn out as expected they get tend to upset" , Izak says.

"For the most part, the women I draw get excited. Some may have a very definite ideas from the beginning which makes it hard for me to be creative . If it gets difficult, I put them in a fantastic dress, and everyone is thrilled".

In Izak's illustrations, the detailed clothing and makeup are always prominent parts. He is intrigued by all areas of fashion, from sporty jeans girls to red carpet glamor.

"I am always up to date in the realm of fashion. I like to do my own interpretation and put my own personal touch on the shape, the colors, the silhouette. If I were a woman I would be dressed in Sonia Rykiel. I like the essence of her feminine French style", Izak says. He shows his excitement with big gestures when describing what characterizes French fashion.

"There are subtle differences between the different French styles; to me Sonia Rykiel is ‘La Parisienne’ (Parisian) while Coco Chanel is ‘La Francaise’ (French). As a native Parisian, Rykiel's style is what I am most drawn to".

The beret is a French attribute that Izak Zenou likes to use in his illustrations. When he got into the business with Petites Mains' graphic expressions, it was given that one of the illustrations should have a beret on it. Petites Mains first sewing doll got to be a Parisienne with cute beret on her head.

"Not every woman can pull of a beret, but if it is the right kind of woman I think it is a good accessory. Inès de la Fressange in sailor sweaters and berets though, is one of those who can", he says.

When we met for the first time over coffee and croissants in Tel Aviv, Izak started sketching a woman in profile wear a beret while tying a bow on the napkin, which is now a part of our Petites Mains DNA.

The original meaning of Petites Mains in French is small hands and also the official term of the seamstresses of the Haute Couture houses in Paris.

"When you told me about the idea behind Petites Mains as someone with French heritage I instantly saw the fantastic Petites Mains seamstresses in front of me. They are so precise in their work, every pearl is important in their skillful hands".

"For me, it immediately became important to emphasize the exclusivity of the fabrics, the exquisite details, and the precise needlework".

Izak’s first assignment for Petites Mains was to create the company's fashion identity by illustrating the silk paper that comes with our creativity boxes, and a rag-doll for the thread. The silk paper presents five women's silhouettes, all of which represent different styles within the Petites Mains universe. The doll with her beret and decorated costume got a marked waist where the sewing thread could easily be rolled up, instead of a normal sewing thread roll. "I wanted the sewing doll to have charm, be timeless and elegant. Her eyes are closed because she's waiting for you to get started on your project, and she looks forward to it. She will help you in your needlework through her consensus and friendship. She'll give you a smile on your lips".

When Izak presents the finished doll illustration and describes her personality, I am touched. That Izak Zenou's artistry has become part of the Petites Mains identity fills us with pure happiness. He understands the concept, the joy, and in addition, the atmosphere of Paris couture salons sits in his genes.

After art school in Paris, Izak began experimenting with his artistry. Regardless of school, he considers himself self-taught. The big impact came when Karl Lagerfeld's creative team at Chanel saw an advertising campaign for the low-price chain Monoprix in the subway that Izak had drawn.

"Being discovered by Chanel was a wonderful feeling. They ordered 46 illustrations that had to be ready in a week. I literally worked around the clock and I was exhausted almost feeling overwhelmed by work. But the drawings were sent to every fashion editor around the world and I immediately became a name in the industry".

The doors to the fashion world were wide open after the Chanel assignment. Shortly afterwards he moved to New York, and started working for clients such as Bloomingdales, Saks Fifth Avenue, Bergdorf & Goodman and Vogue. The rest is history.

For over twenty years, New York has been the home of this kind and entertaining Frenchman. He starts his morning early cathing the morning light for perfect sketches.

"My women are not perfectly drawn. Perfectionism is not original enough. I often use soft colors in my sketches since they have a calming effect".

When I take the New York subway home after the interview ends, I think about how perfectly Izak Zenou's artistry and Petites Mains concept match. Not only does he give life to Petites Mains various women, but also commends the personal expression. When Izak creates, anything can happen in the creative process. He likes to improvise and the result is always playfully elegant with a strong sense of fashion. Handwork is so much more exciting than the perfection of something produced in a factory.

Keep your eyes open for more products that will have Izak's skilled hand behind the design.

More From The Magazine 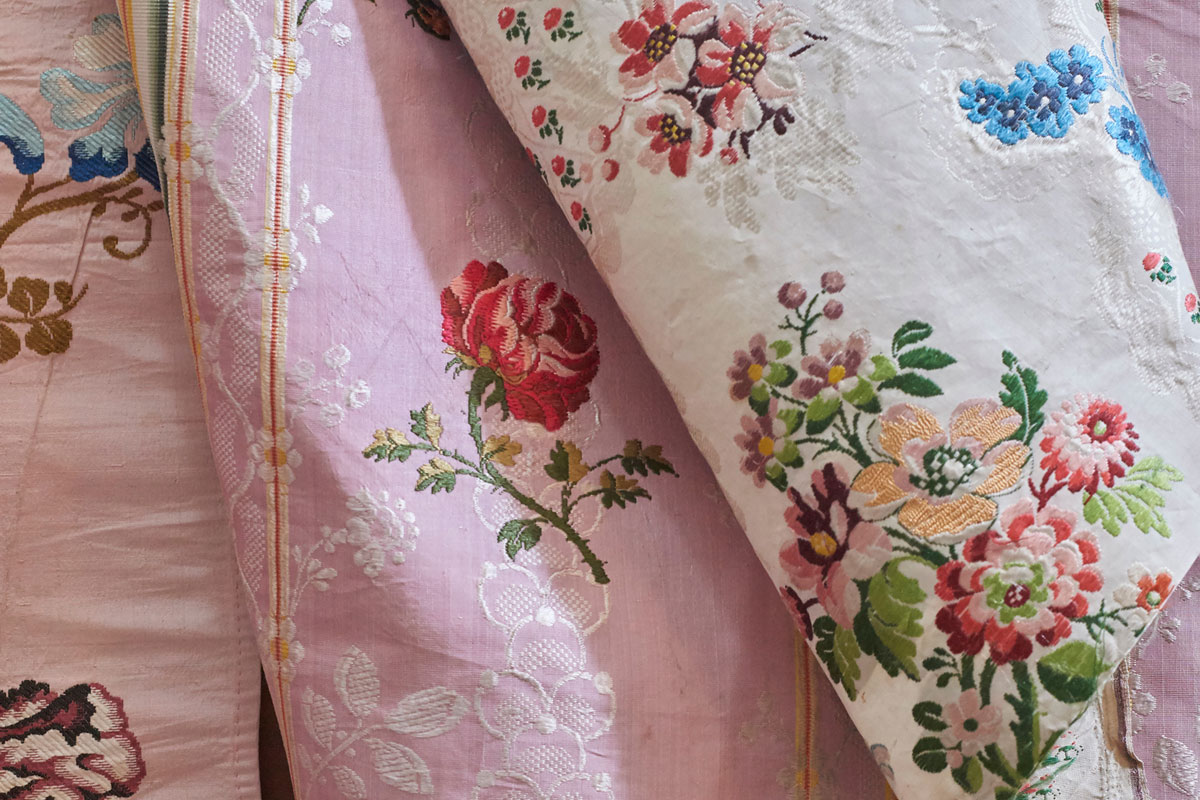 The enchanting world of brocades 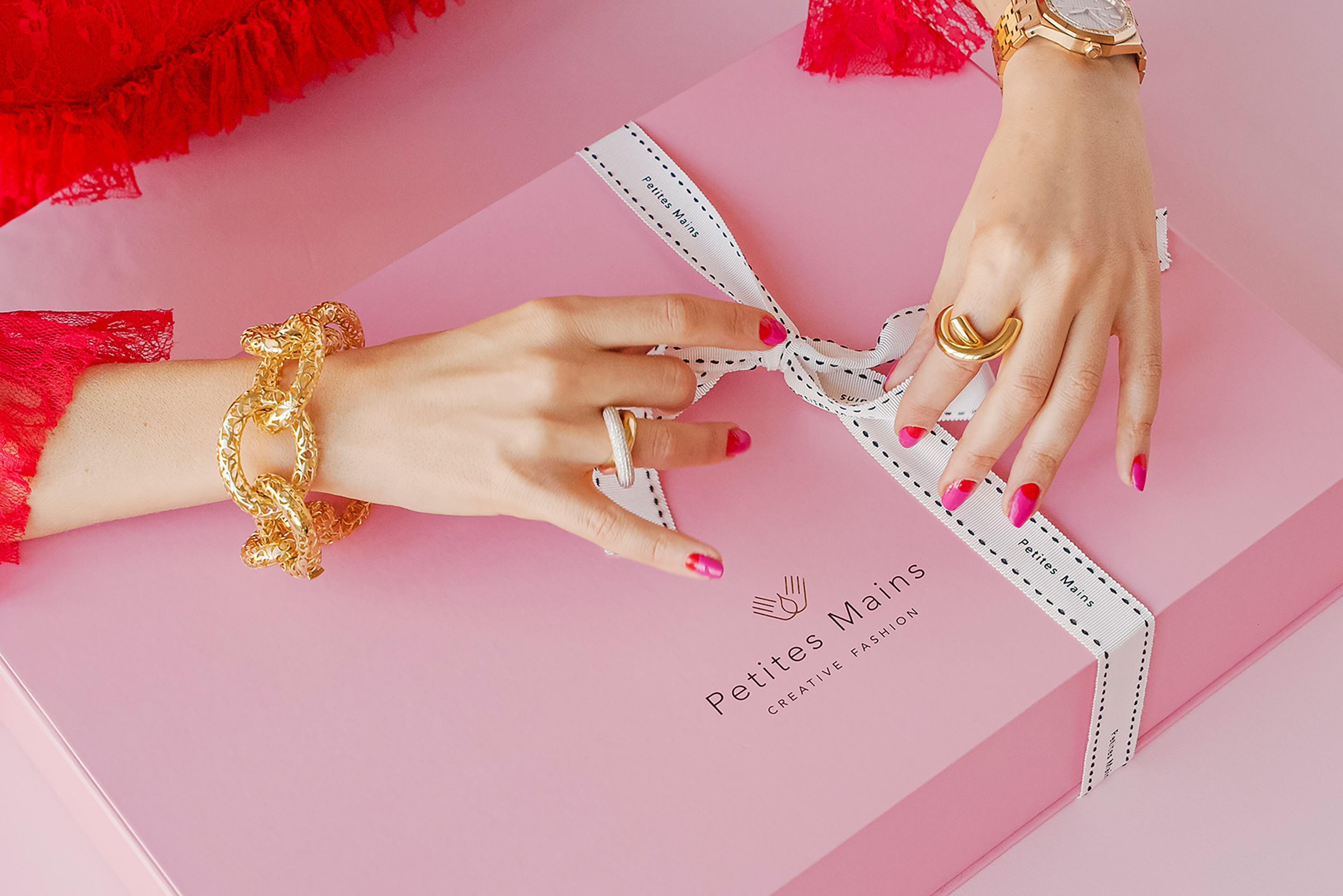 All about the hands 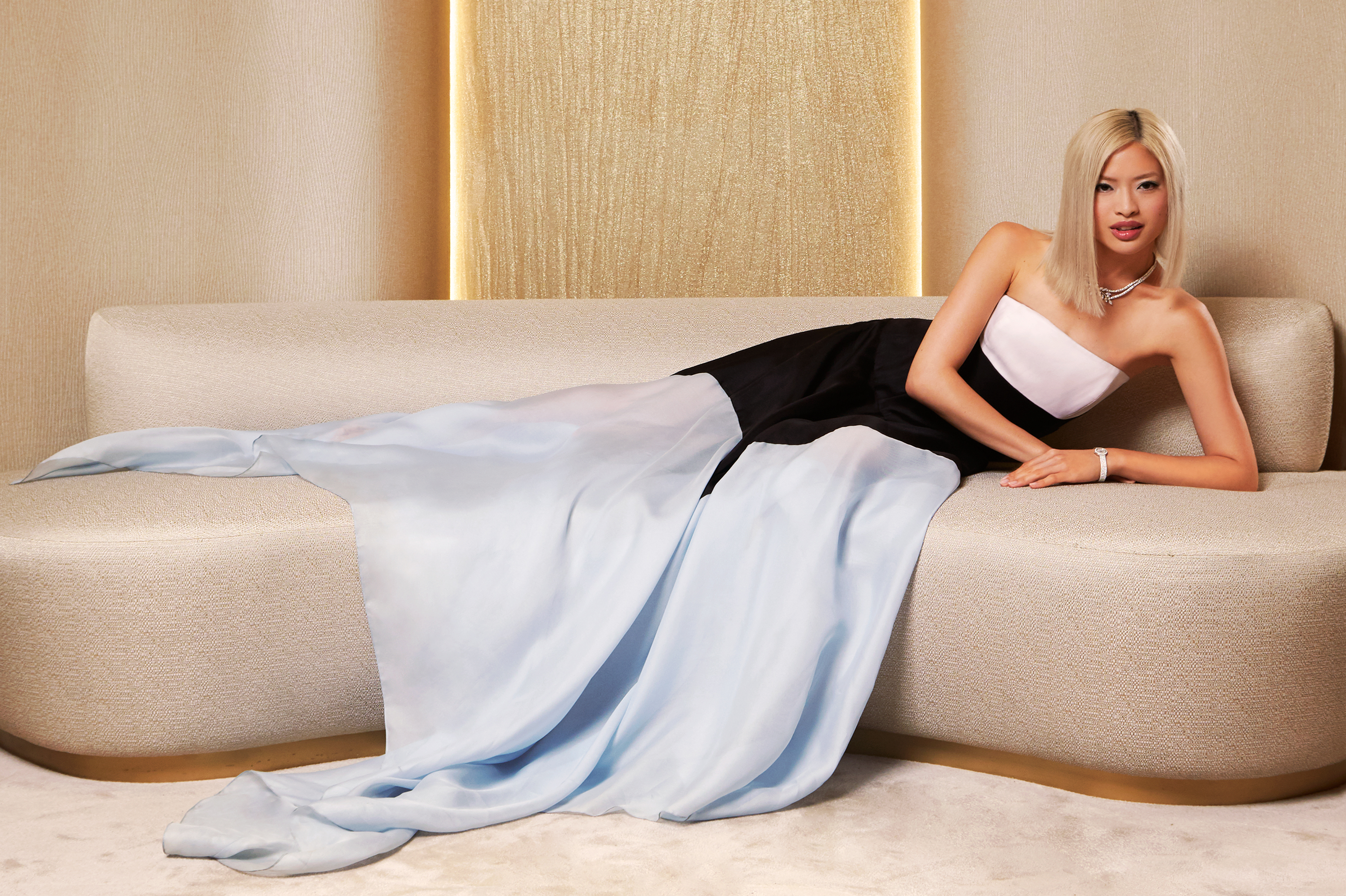 A Maison of Splendour from the Swiss Alps

"I see beauty in all women" 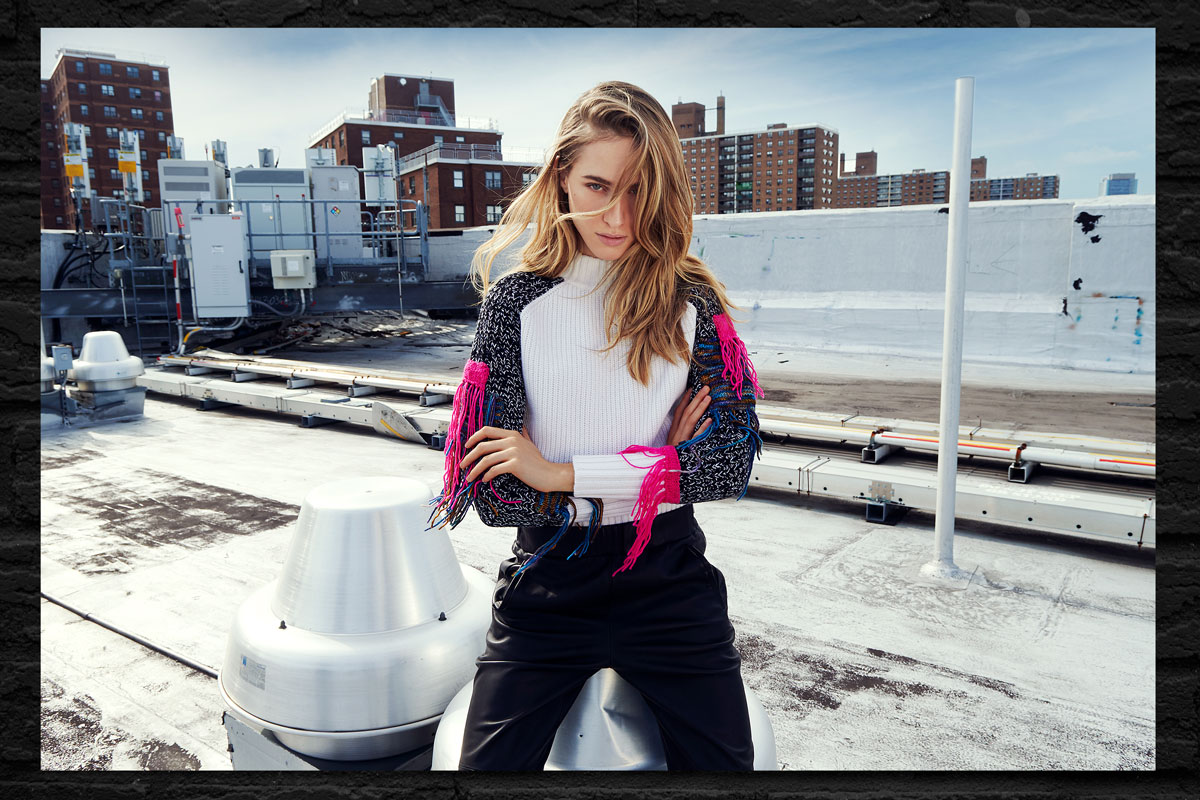 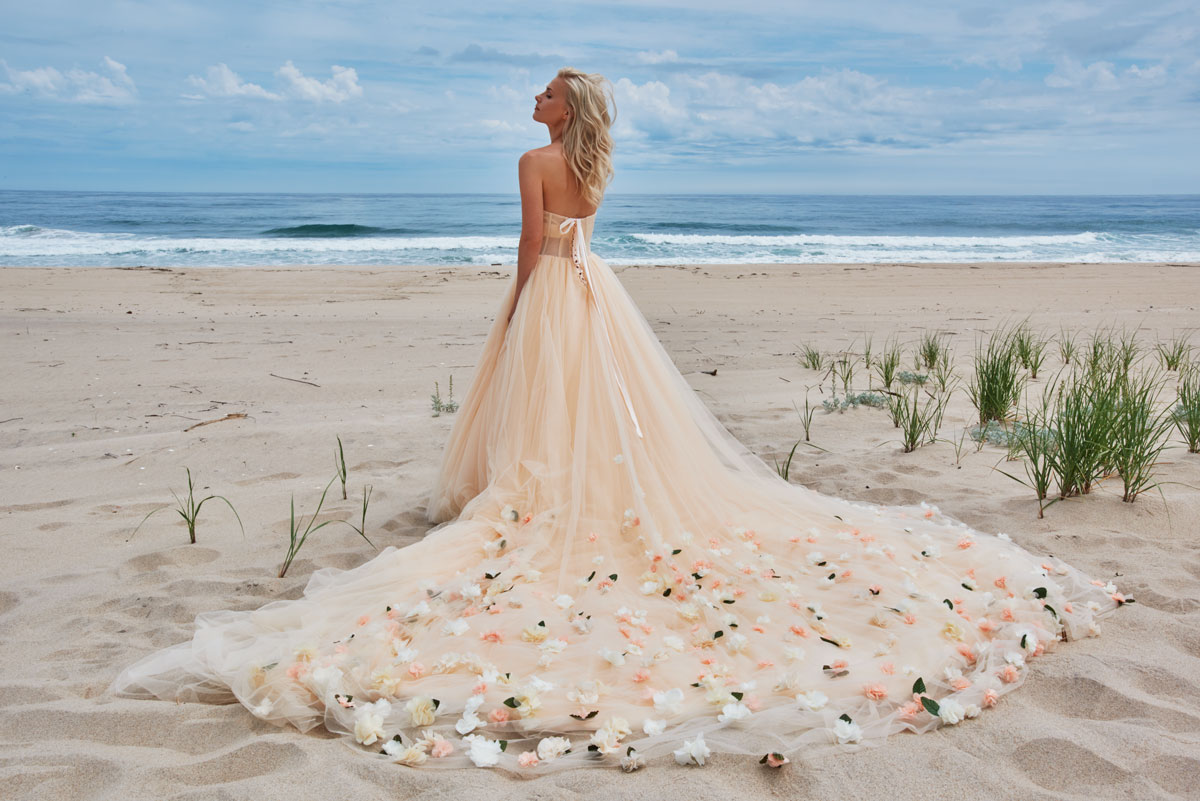 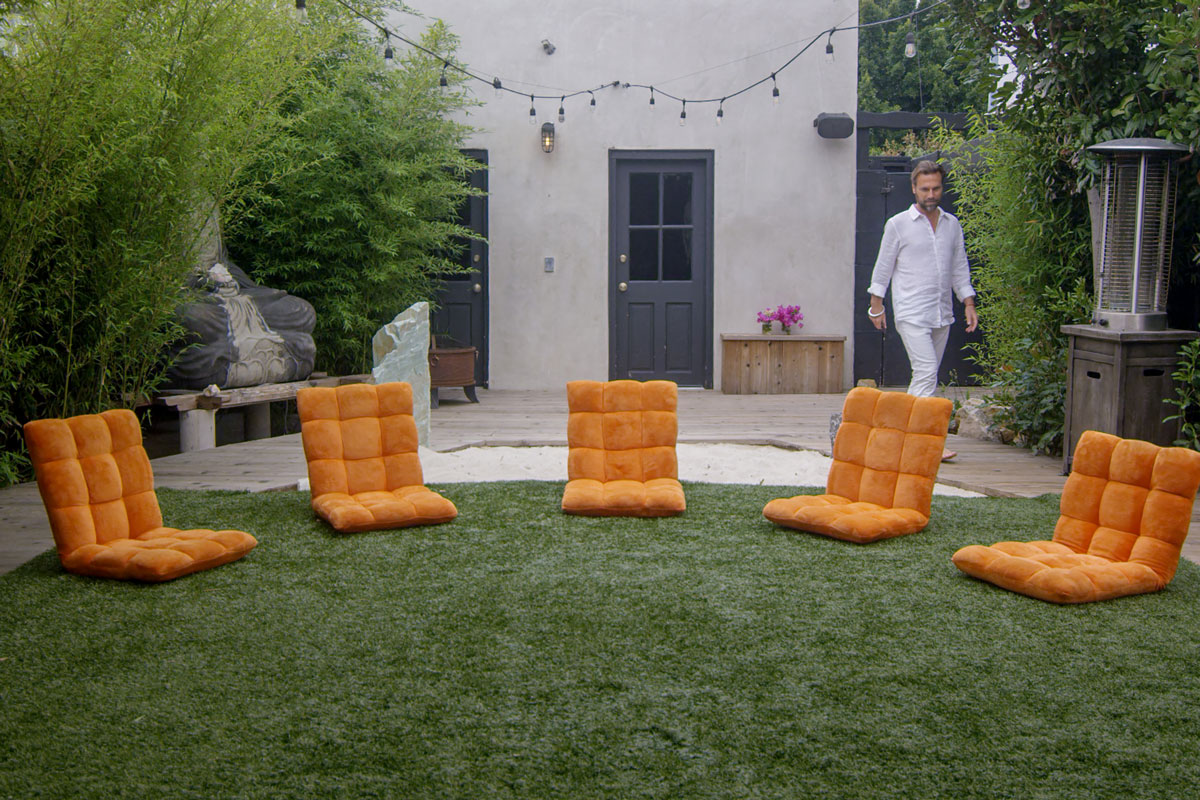 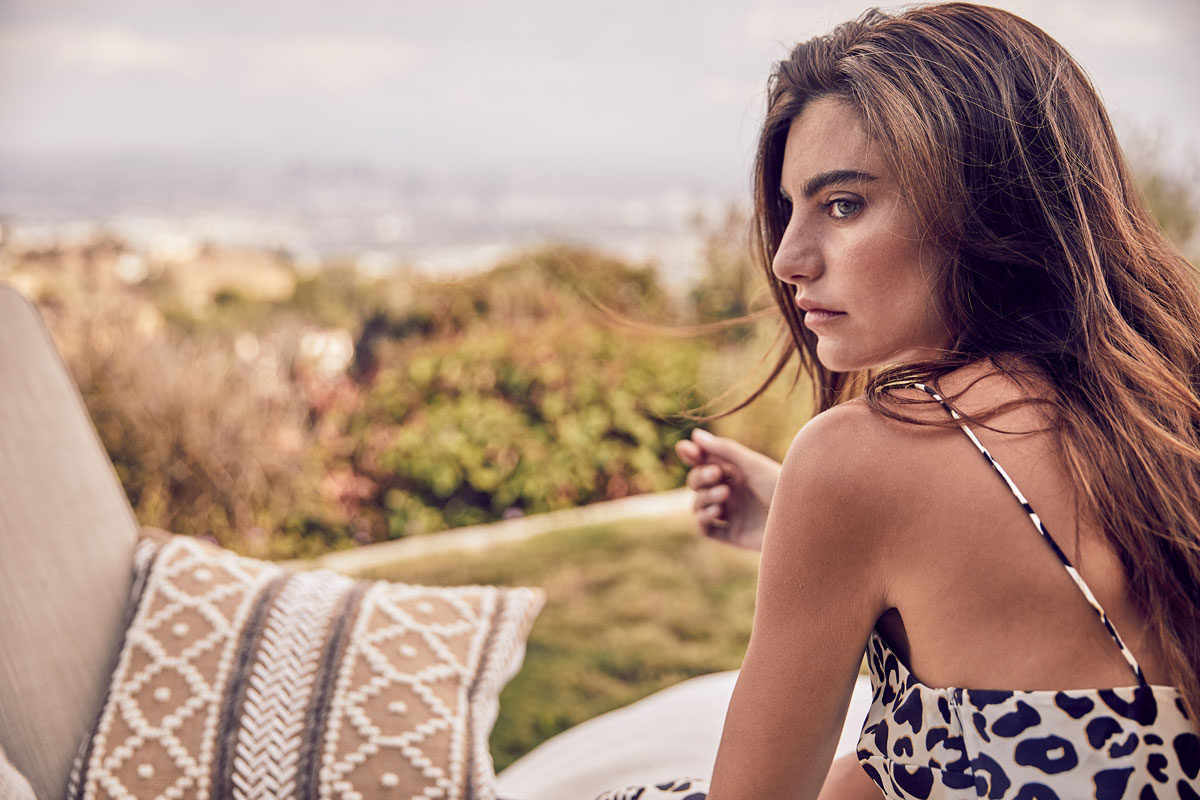